Sally is thrilled to be selected as a FINALIST in the 2020 Gallipoli Art Prize with her piece called “Troops Swimming At Anzac Cove”, 40x50cm, oil on oil paper, mounted on board and framed. The concept of conducting art prize competitions in both Australia and Turkey to commemorate the legacy of those heroes who fought on the Gallipoli Peninsula in 1915 was conceived in 2004 and developed during 2004-2005.

The Gallipoli Art Prize will be awarded to the artist who best depicts the spirit of the Gallipoli Campaign as expressed in the Club’s “Creed”. The Club’s Creed is: “We believe that within the community there exists an obligation for all to preserve the special qualities of loyalty, respect, love of country, courage and comradeship which were personified by the heroes of the Gallipoli Campaign and bequeathed to all humanity as a foundation for perpetual peace and universal freedom.”

For more information go to: https://gallipoli.com.au/art-prize/ 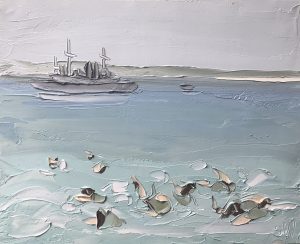 This entry was posted in News.